For now, I don’t really believe in Bull or Bear for crypto, at least in the short-term. Indicators are lagging and the moving average doesn’t take into account several factors that directly impact pricing.

Bullish and bearish indicators do provide a level of comfort to traders, especially day traders and the movements they make due to the influence of these signals does provide some level of predictability in the market, but these are short-term constructs within a larger curve, what I call the Adoption Cycle Curve.

What is the Adoption Cycle Curve? Pretty much what it implies. Most people try to understand what they are dealing with by applying models to anything unknown such as where crypto pricing will go. The same is true for Bitcoin as we try to apply standard market parameters to something we cannot define or have no historical basis for in the practical world. Is Bitcoin Bull or Bear? Does the upward trend have support? What about the signals? Clearly Bitcoin and other coins follow signals, otherwise how do people trade and make money in it?

Interesting questions, but all short-term focused and they do not take into account the genesis of the signals. If you look, many of the indicators traders rely on are a result of trading in a certain direction rather than projected movements in the market. In other words, once again, they are lagging signals that are not completely accurate. Why is that?

Expanding the vision, there is an overlay on top of these trading indicators that impacts their movement beyond normal market influence. Out of the blue, a whale cashes in and what happens to the market. Public sentiment gets bearish or bullish based on an external event. In a normal market, this would be marginalized based on the number of participants, but it impacts crypto. Why?

This is what I call the “Adoption Cycle Curve”. As far as I know I coined the term as it pertains to crypto, but who knows. That doesn’t matter. What does matter is that this curve allows for price movement and short-term volatility within the model based on market events, but then it also considers the level of adoption by the market and the weight by which each indicator is weighed according to the level of participation.

In other words, what the normal market indicators fail to factor in is the extent and depth of an event or events. What we consider bull or bear and can even be reduced down to volatility trading within a larger framework. The Adoption Cycle Curve is generally a wider, longer-term look at any innovation and it looks at value and volume over time. So while there will be short-term trading opportunities within the Adoption Cycle Curve, attributable to the impact of standard signaling, outlier events cannot be ignored. Additionally, the rate at which these events have to be taken into consideration construct a diminishing curve directly proportionate to the rate of adoption.

Historically, we can validate this with the data below. At each drop point was an event that negatively impacted bitcoin price. The event had a significant impact because there were not enough market participants to carry pricing and marginalize the impact. In a market with 100% market participation, it would take the same ownership percentage compared to the entire market to have the same downward force.

Additionally, when I look at Bitcoin, I don’t see the short-term trading signals. What I see is the pendulum effect of weighted pricing impact. Market interest with few players, then market interest grows. Then something happens and weak hands exit. Pricing dumps. Then the Adoption Cycle repeats. 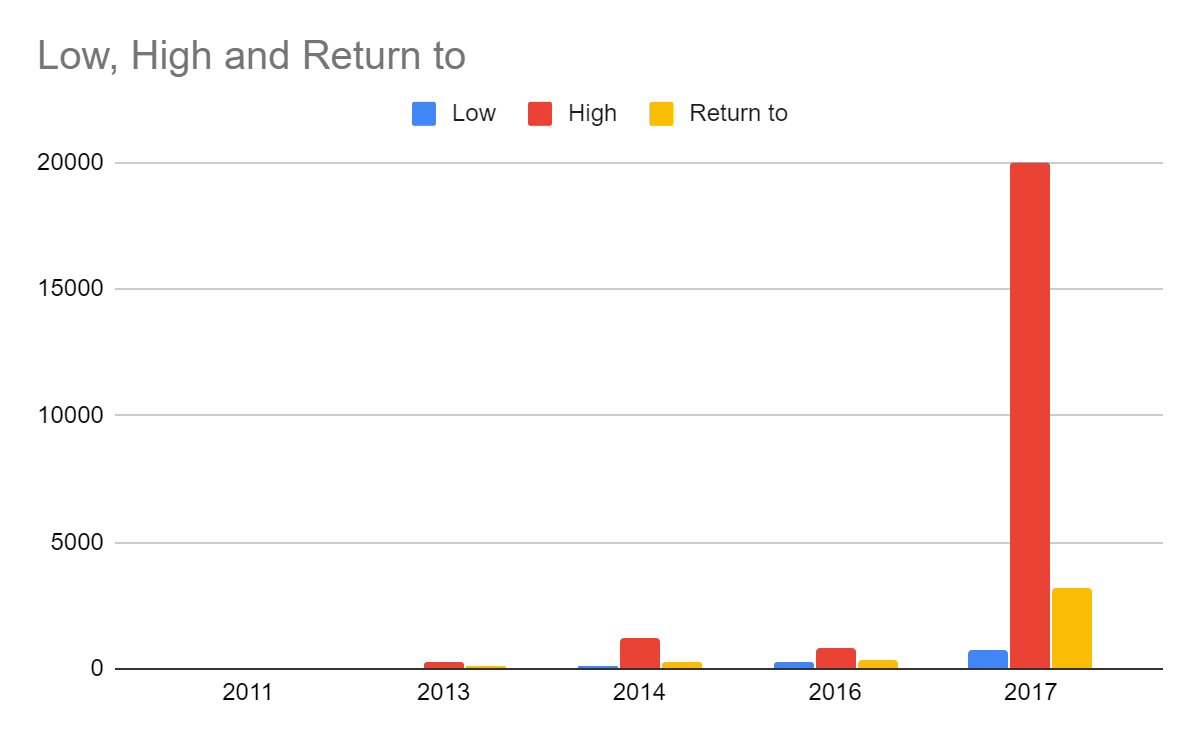 Currently, it is stabilizing around $10,000 until it begins running up again to the next exponential point which can be a multiplier of anywhere from 3 to 90 depending on the depth of the adoption by the consumers in the marketplace. The more adoption, the higher the multiplier. This is what the gurus making their predictions of Bitcoin pricing between $100,000 to $1,000,000 per Bitcoin are basing their projections on and, while I think the financial models they use are not consistent, they still have credibility.

I don’t like making predictions because there is no way to reliably predict what that multiplier will be, but I estimate it around 25 strictly for my own personal use. That number may go far higher if the adoption of crypto reaches a tipping point where Bitcoin can escape the adoption curve and transition into a free market curve, thus smoothing the volatility.

Then comes the next phase. For now, altcoins are still dependent on Bitcoin pricing, but once the tipping point is reached and Bitcoin transitions to free market, I project you will see a separation of altcoins from Bitcoin and that is where the altcoins will begin to stand on their own merits rather than be attached to Bitcoin value. Then the entire cycle begins again for altcoins as the crypto market continues to get more entrenched with viable alternate financial and technological lifestyle.

What do you think will trigger the next bull market?

As I said in the previous response, I am not a fan of bull or bear for Bitcoin. I think it is a short-sighted view. Upward trend is currently based on crypto demand which is driven by how deep and wide crypto becomes used by the everyday consumer. Can they use it to buy stuff? Can they pay for services? What are the tax implications? These questions and more will determine how quickly Bitcoin is accepted as a form of currency.

And we can’t afford to be naive. Governments are running scared and will do all they can to mitigate the impact of crypto in the background. Imagine what would happen if governments no longer had control of an economy. We are talking about a complete and utter paradigm shift in world markets. And make no mistake, there is a clear and subversive move by most bureaucratic entities to keep this from happening.

We will only see prevention measures worsen in the short-term as crypto becomes a more viable replacement for fiat in many central governments. All you have to do is look at China, United States, Europe and other major market crypto policies to see how they are trying to prevent the adoption of crypto, but control is an illusion.

Just like interest rates, market demand and the value of fiat currency, sooner or later the government is no longer capable of constraining the will of the population. Currently, there is a direct correlation to the level of effort governments exert to prevent crypto adoption and how close we are to adoption. It isn’t as far off as many would like to think.

That said, if you are a proponent of crypto, then you have to understand what will make it accepted by consumers, and the answer to that always comes back to adoption. When the public, as a majority accepts blockchain as either an alternate currency or a viable technology, then we will see a major spike in both use and pricing. This is why I am such a fan of projects like Atheneum, WhoTakesCoin and other similar projects, because they focus solely on the propagation of information in the marketplace utilizing the blockchain.

Everyone, Everywhere Who Takes Coin

To reach me or any of the staff, simply use the contact form found here.